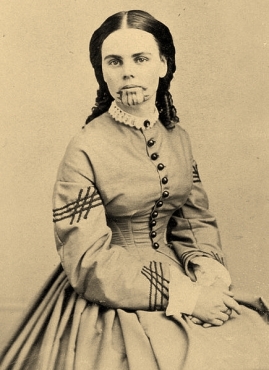 The town was established in 1902 as a miner’s camp. In 1910, two prospectors discovered 10 million dollars in gold.  The town was named in honor of Olive Oatman.  Olive was captured by a band of Indians around 1850 and spent the next 5 years in captivity and slavery.  The Indians tattooed her chin and arms.  The U. S Calvary rescued Olive near this community.  She went on to write a best-selling book and gave lectures across the United States about her family being massacred and her years in captivity.  Her story is fascinating.  Today, the town has wild burros wandering through the streets and reenactment of gunfights can be seen on weekends.  The 1902 Oatman Hotel still stands.  In 1939, the hotel became famous when Clark Gable and Carole Lombard spent their wedding night here.  Truly, a community to visit and Olive Oatman is woman you should read more about!