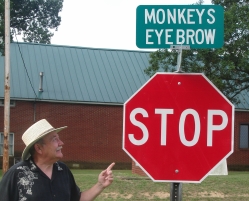 Mark’s first book was Hometown Revelations-How America’s Cities, Towns and States Aquired Their Name.  He was surprised how this book took off and was a popular topic for newspapers, magazines and radio talk shows.  During this time, Borders Books sent Mark on a 6 state book signing tour covering the Midwest.  Later, Hometown Revelations was featured on NPR’s Morning Edition with Linda Wertheimer and featured as one of their Best Books of the Year.  On television, Hometown Revelations was featured on the PBS series Rare Visions and Roadside Revelations.  Mark attributed this success not so much in his writing abilities but because of the book’s topic.  Mark said “I think the book’s success was due to the fast paced society we live in.  I think a lot of people live in a community all their life but never thought about how their town acquired it’s name or how some towns they drive past on the highway have such peculiar names.”

If you have never heard of Mark, he’s the guy along the side of the highway looking at the funny road sign or historical marker.